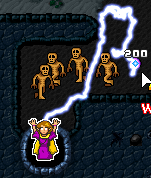 Lightning is the first skill that Azra learns. It strikes a single enemy for moderate damage. Although weak it is one of the most useful skills in the game due to its low cost and short cooldown time. It is learned before Caravan of the Dead. It is the only skill in the game that is required to be used (to avoid damage in Caravan of the Dead).

The version used by enemy bosses (Zelemir and Eztli-Tenoch) inflicts damage on a defender equal to a certain percentage of the target's health (50-90%, depending on stage of the game).

In Game Description: Deals ** damage to a single enemy.

Retrieved from "https://defendersquest.fandom.com/wiki/Lightning?oldid=5837"
Community content is available under CC-BY-SA unless otherwise noted.